Scottish Castles.... there's really nothing else quite like them!

There have been over 3000 castles built in Scotland, that's roughly one for every 100 square miles, a pretty impressive figure.

Today, approximately half that number are still in existence.

Scotland contains some of the oldest (and most famous) castles in the world, and they each have a story to tell about this country's fascinating, but violent and turbulent, past.

Some castles in Scotland are still structurally intact, others are in various states or disrepair or remain only as ruins.

A number of them are are open to the public for viewing, or have been converted into hotels. A few are currently in use as private residences,

Every one of them is unique and fascinating.

These incredible structures stand as awe-inspiring monuments to the life of the Scottish people in centuries past. 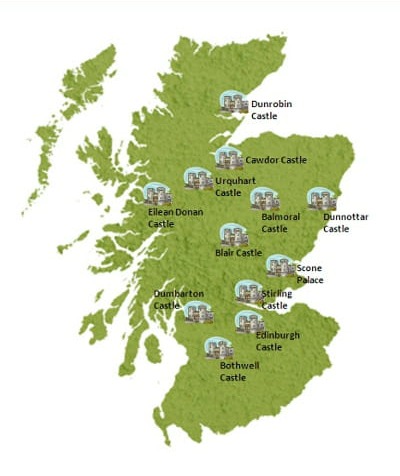 
Scottish Castles - In The Beginning

Scotland is an ancient country, and it's incredibly rich in history.

You have to go a LONG way back in time to find the first inhabitants of this land, all the way back to the 'Mesolithic' period in fact, around 7000 BC.

Of course, no castles existed at that time, and it wasn't until several thousand years later that people began to even build homes (basic wood/stone huts) rather than live in caves.

Then we have to move forward again, by approximately another 3,500 years, before the very earliest signs of 'fortifications' (early Forts) appear.

These were simple wood/stone structures and may have been the very first Scottish 'Castles'.

However, the oldest existing Scotland Castles today, go back to the 11th and 12th centuries, about the time that the Normans invaded Scotland.

That's plenty old enough for me though, and when you're standing inside one of these incredible structures you can almost feel the history seeping out of the ancient walls around you.

It's an experience no visitor to Scotland should miss.

It's hard to really imagine the things that have happened within the ancient walls of Scotland's iconic castles. Births, deaths, imprisonments, executions, battles, seiges... and so much more.

So perhaps it's no surprise that many Scottish castles are said to be haunted by the restless spirits of centuries gone by. Some have a single ghost, others several. Many have been witnessed by visitors and staff alike, others have even been photographed.

If you'd like to find out more about Scotland's haunted castles check out this page!

There are as many different words to describe the castles of Scotland as there are castles themselves - which is fitting as each one is unique in its' own right.

For me, Scottish castles are sort of like little slices of history, or maybe even individual pieces of a jigsaw puzzle, and when you learn about each one you can start to see the whole picture (or 'pie' if we go with the 'slice' analogy).

The castles of Scotland ARE this countrys' history, and they're right here waiting for you to explore them.

The Where & Why of Scotland's Castles

Why does Scotland have so many castles? That's a fair question given how tiny the country actually is, but if you know anything about Scottish history the answer is pretty clear....

It's because this nation has a very contentious, battle-strew and bloody past, with numerous invasions (the Normans, vikings and Romans to name a few), and (until the 18th Century) an ongoing, almost continual, conflict between Scotland and the rest of Britain! 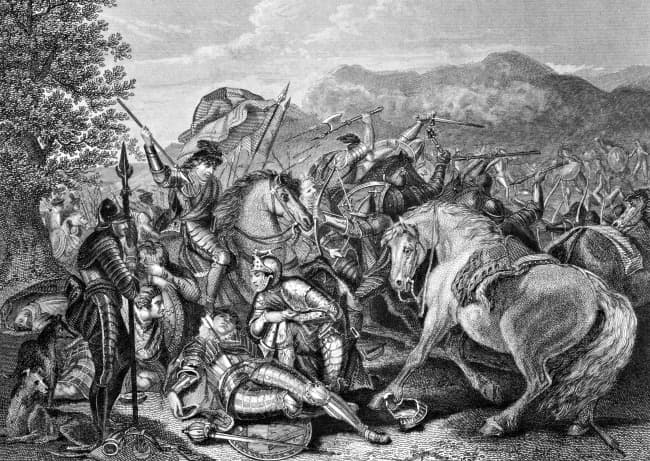 Scottish v English troops at the Battle of Otterburn, 1388

Although some were built at the location of previous fortresses, or abbeys, in general Scotland castles were built with military purposes in mind, and that's why you'll find them in some of the most spectacular locations.

Whether perched on the very edge of a cliff, with the ocean pounding the rocks far below; on an island at the meeting point of 3 deep lochs; on a 'spur' of ancient volcanic rock overlooking heather-covered glens; or on craggy snow-covered mountainsides; the locations were carefully chosen by 'canny' Scots.

Over the centuries some castles were destroyed during sieges or battles, others fell into disrepair and ruin due to abandonment or neglect. But the fact that so many castles are still standing is testament to the skill and foresight of the ancient Scottish people who built them.

Scottish castles are closely tied to the Clans of Scotland and the Scottish monarchy.

Many of these iconic castles were clan strongholds, the seat of the Clan chief or other important clan figures/family members.

Because of the volatile and turbulent nature of Scottish history (including considerable clan-rivalry), sometimes these castles would 'change hands' (often several times) between warring clans, and between governments and royalty.

Over the centuries, many of Scotland's castles were visited members of the royalty and famous Scottish people (such as Robert the Bruce, Mary Queen of Scots, William Wallace, various royalty and more), and they were often sought out as places of refuge and safety.

Today many of the castles that have been renovated and kept in good repair are still home to the 'landed gentry', the official 'seat' of a particular Scottish clan, or the birthplace or home of royalty.

So, although the castles of Scotland were mostly built during the period between the 11th - 14th centuries, they've proved themselves to be as strong and resilient as their creators intended.

They still stand strong and proud..... bearing witness not just to Scotland's' fascinating past, but to the tenacity, bravery and love of tradition that still lives in the heart of every Scot today!

The Oldest Castle in Scotland

There are so many Scottish castles, both on the mainland and on the numerous islands, that no one can say for sure which is the oldest. In some cases historians can't even pinpoint when a specific castle was built.

However, Castle Sween, which is located on Loch Sween on the western coast of Argyll, has the honor of being the oldest Scottish castle on the mainland that can be dated relatively accurately.

Historians believe that Castle Sween can be confidently dated to the 12th century due to some design features, including an absence of windows and buttresses on the outer walls.

As with other Scottish castle sites, archaeological evidence suggests that the castle was built on a site that had been previously occupied, and likely built upon. Excavations at Castle Sween have found Stone-age, Neolithic and Medieval artifacts.


Stay in a castle in Scotland!

If you've ever wondered what it would be like to stay in a Scottish castle, there's a way to find out!

Many castles in Scotland have integrated hotel accommodation, bed & breakfast opportunities, or even spa facilities.

Whether you just want to sleep in a real castle while on vacation, or dream of holding a family reunion, celebration or wedding surrounded by the history and charisma of a genuine castle, there's castle accommodation for YOU in Scotland.

Check out this page to see twenty-five of the very best Scottish castle stays available!

With over 3000 to choose from, making a 'short list' of Scotland castles is pretty much an impossible task.

There's a castle (or several castles!) to suit every taste... whether you prefer spectacular, windswept ruins or enchanting, 'fairytale' architecture.

But I made a valiant effort to pick out a handful of Scottish castles, ones that I feel will showcase the richness and diversity of these awesome structures. I hope you enjoy them. 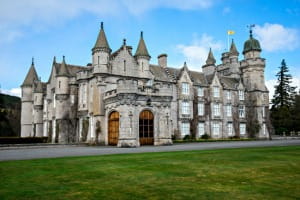 Balmoral Castle has played a significant role in the lives of British Royal Family.

Originally built as an 'Estate House' in 1390, Queen Victoria fell in love with it during a visit to the Scottish Highlands in the mid 1800's. 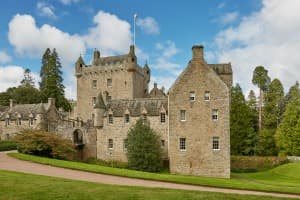 It's extremely old, dating back to somewhere around the 14th or 15th century.

As a 'Cawdor Campbell' myself, I'm a little bit biased, but I definitely think this is a castle of the 'fairytale' variety! 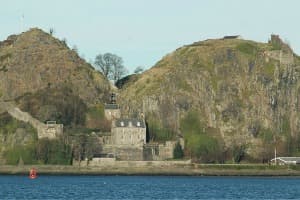 Dumbarton Castle sits 240 ft above the town of Dumbarton.

Written records of this rock date back to the 5th century, and a simple fortress of that time. 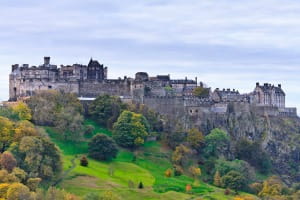 Edinburgh Castle is one of the most famous Scottish castles. It sits high on volcanic rock, over 250 ft. above the city of Edinburgh.

It has sheltered some of Scotland's most famous historical figures and is still 'active' in many ways. 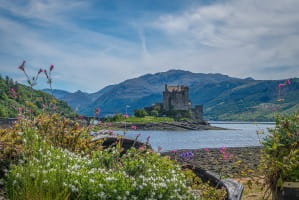 The name of Eilean Donan Castle comes from the Gaelic meaning 'Island of Donan' ('Eilean' being 'Island' and the 'Donan'.

This castle is believed to have been named after the 6th Century Irish Saint, Bishop Donan, who lived in Scotland during the latter part of the 6th century AD)

Probably the most photographed of all of Scottish castles. 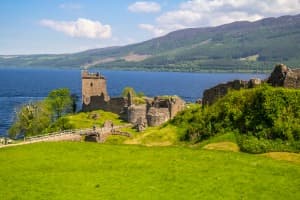 Urqhuhart Castle is one of the largest castles and strongholds of Medieval Scotland and has a long (and bloody) history.

As with so many of Scottish castles, Urquhart Castle has a magnificent setting and is strategically placed in terms of defense.

It sits on the shore of Scotland's famous Loch Ness, home of the fabled Loch Ness monster. 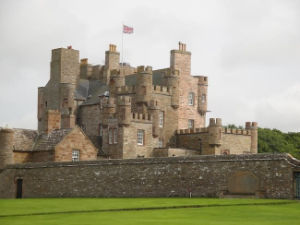 Castle Mey is the Queen Mother's Scottish Castle, and is the most northerly castle in the UK.

Castle Mey was built in the mid 1500's by the fourth Earl of Caithness.

It changed hands many times before HRH the Queen Mother bought it in 1952, after the death of her husband, King George VI.

The Queen Mother's castle in Scotland is now lovingly maintained by a trust with HRH Prince Charles overseeing it's care, allowing it to remain as it was during her time of residence.

Scottish castles are obviously old, some of them ancient!  Many of them are located on, or near, the coast or on elevated land which puts them at high risk of being damaged by environment and weather (including climate change).

An inspection program of hundreds of historical buildings and sites, including many of Scotland's castles, has been underway since 2021 resulting in restricted access to many of them.

If you're planning on visiting a castle, historic building or site, it's a good idea to check their official website for information on any restrictions or closures that may apply.

You can also find a list of all sites with restrictions (as of January 2022) here at historicenvironment.scot