All About The Clans Of Scotland

Ancient...  enigmatic.... colorful.... complex.... all of these words describe the Clans of Scotland which are part of this country's compelling historical journey.

The Scottish clan system plays a big role in Scottish culture and tradition and has it's roots in the ancient Celtic tribal system. So it fits in perfectly!

A clan has been many things, over hundreds of years... including a family group, a political system, and a means of defending territory and ensuring survival in harsh conditions and difficult times.

It's as hardy and resilient as the Scottish people themselves and has survived (and thrived) throughout centuries littered with bloody battles, as well as many attempts to destroy them.

Today, Scots around the world are still committed to their clan heritage and fiercely proud of it too. In fact with today's growing interest in genealogy, heritage and history, you could say that clans are seeing a 'revival' of their own. 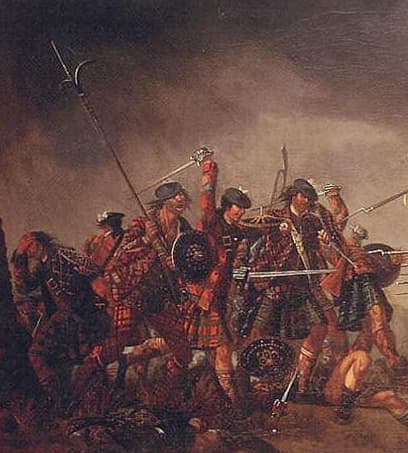 How The Clans of Scotland Were Born

The Scottish clan system seems to have been pretty well established by the 11th and 12th century, but signs of their existence go back as far as the 6th century.

The original clans of Scotland were basically extended family groups, the majority of members were related by blood and descended from a common ancestor.

They also contained a number of 'Septs', which were families who didn't have direct blood ties to the Clan Chief (or Chieftain) but were still associated with it.

Often these Septs wielded a certain amount of clan power themselves.

Other individuals sometimes joined a clan to show their support or to seek protection or simply to stay alive.

In the beginning clan names were usually tied to specific areas, known as 'clan territories', they were created to bond residents of that area and to protect it from being invaded or stolen by other groups. 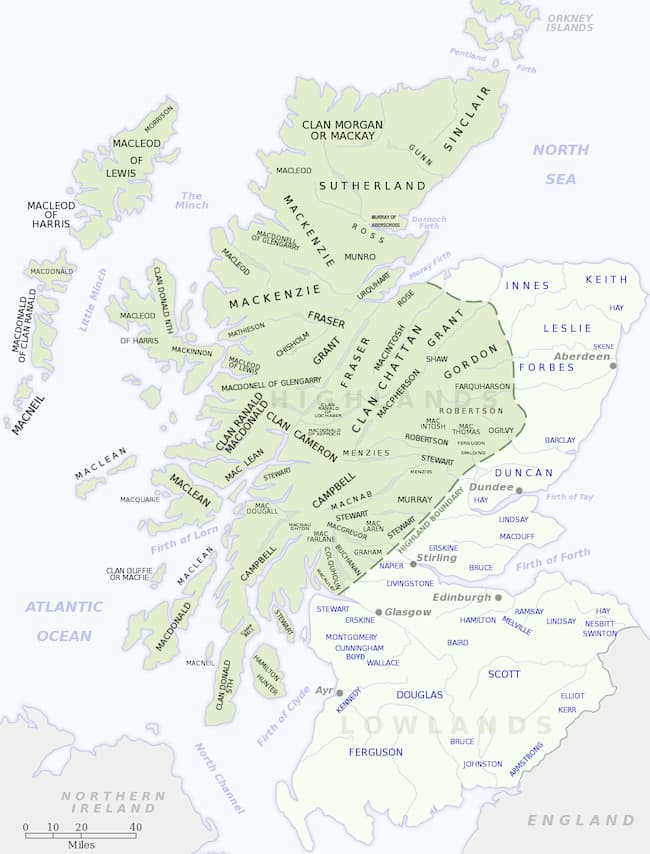 Map showing the territories of the clans of Scotland.

Plus, that type of landscape also helped when it came to setting up defenses to protect individual territories.

Each individual Scottish clan was tightly bound together, by blood and by loyalties, and they tended to develop their own very specific customs, traditions and laws.

Loyalty and devotion ran deep, and feuds with rival clans were often passed down through the generations - the ill-will refusing to diminish over time.

Many bloody battles were fought over clan territories, and there was generally no love lost between the Highland clans of Scotland and the Lowland clans or septs.

By the 1800's they were under attack in the form of increasing pressure from the English monarchy and British Government.

Clan grave marker at the site of Battle of Culloden

North of mainland Scotland lies the The Shetland Isles and the Orkney Isles.

These were part of Norway until the mid 15th century when they were 'gifted' to Scotland.

They never adopted the clan system, or many of the other traditional Scottish cultural traditions such as kilts or bagpipes.

In 1746 a Scottish rebellion was defeated at the Battle of Culloden, and the Scottish clan system was almost destroyed.

However, the Scots are nothing if not determined and hardy, and they clung to their traditions and beliefs and in the 19th Century they saw the popularity of their clans begin to see a revival.

Since then a growing interest in Scottish history & culture has people  across the world wanting to learn more about their Celtic ancestry and roots.

Overall, the clans have played a huge role in shaping the culture, traditions, attitudes and sentiments of the Scottish people.

How The Clan System Works

When we think of a family we tend to think of blood-relatives, but of course there are relatives by marriage ('in-laws'), and close friends who we consider to be family.

Clans work in a similar way, with each one being led by a Clan Chief (or Chieftain) whose family would usually lived in their own ancestral castle. 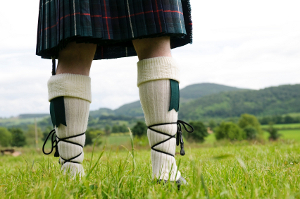 Each clan had their own fiercely-guarded territory or land, and was ruled by the powerful Chieftain who controlled just about every aspect of daily life.

But historically, these are much more than family groups, in fact for centuries this was the main political system in Scotland.

Membership passes down through the male side of the family (patriarchal).

It's centered around the man's last name, so once a woman marries she becomes part of her husband's clan - while the rest of her birth family remain members of her father's clan.

Also, it wasn't unusual for the Clan Chief's children to be raised by a maternal uncle and his family in a different clan.

Both of these practices helped build ties between clans which paid off during times of trouble or attack. There's strength in numbers, and friendly clans would join together to protect land, cattle and other resources.

Today, the distinctive Scottish tartan (if you're American, think 'plaid') is closely tied to the clan system, but this wasn't always the case.

Tartan comes in an almost endless variety of colors and patterns (although all feature the interlocking horizontal and vertical lines). There are five  hundred different tartan designs which have been woven over the centuries.

Each clan will have at least one tartan that is unique to them, but many clans have several different tartan patterns. Clans Donald (or MacDonald) Stewart and MacFarlane are all examples of this.

Just for fun, here are a few examples of this sturdy, colorful fabric.... FYI the Cawdor Campbell tartan is our clan tartan!

The earliest fabrics were often woven out of one, or two, colors and the link between color, fabric and design had more to do with the natural resources in a certain region, and the craftsmanship of the local weavers, than to anything else.

The relationship between a particular tartan and an individual clan began in the late 1700's when it began to be adopted as a clan symbol, and wearing your 'clan tartan' became a matter of pride.

Kilts themselves were seen as early as the 1500's as a form of highland dress - although they looked quite different from today's version.

The clans of Scotland are ancient, fascinating, enduring and endlessly interesting.

Here are just a handful of the most commonly asked questions about Scottish clans...

How many Scottish clans are there?

Although Scotland is a small country, it has a huge number of clans... estimated at somewhere around 500 in total.

Which is the oldest Scottish clan?

There are two contenders for this position:

Clan Buchanan is a Scottish Highland clan originating from the Loch Lomond area of Scotland as early as the early 11th century.

Clan Robertson (originally known as Clan Donnachaidh, meaning 'children of Donald') originated in the Perthshire area of Scotland during the same historical timeframe as Clan Buchanan. That is during the 11th century.

What is the biggest Scottish clan?

The biggest Scottish clan is Clan Donald (aka Clan MacDonald). Originating in the western Highlands, the western coastline and on the neighboring islands around the 11th or 12th century.

Clan Campbell could well be in second

Which is the most famous clan of Scotland?

There couldn't be just one answer to this question either, because several clans of Scotland are almost household names!

Some of the most well known ones include:

Which Scottish clan was the most powerful and/or feared?

When it comes to the clans of Scotland, being powerful and being feared were pretty much the same thing!

All Scottish clans could be fearsome when the situation warranted it, but some were stronger in numbers, and more warlike than others.

There was also the fact that loyalties to, and feuds between, clans changed from time to time, as did their strengths and weaknesses.

According to one authority, Sir Malcolm MacGregor of MacGregor, of the Standing Council of Scottish Chiefs, the strand of Clan Campbell of Breadlebane 'was particularly violent... and incredibly powerful'.

Other contenders could include Clan MacDonald who were powerful, independent and a force to be reckoned with in the western Highlands and islands, and Clan Douglas (a Lowland clan) who were considered both powerful and dangerous.

Many of Scotland's iconic castles were clan strongholds, seats of power for some of the most famous clans of Scotland.

Often a clan had several strands, and there may have been multiple castles held by these different groups. In addition constant battles and sieges led to castles changing hands fairly regulary.

Some of the most famous Scottish clan and castle links include:

The Clans Of Scotland Today

Scotland has a population of around 5,295,000 (from the official 2011 census which is the most recent available, census 2021 is being planned), but there are an enormous number of people around the world who have Scottish ancestors... anywhere between 45 and 85 million of them!

Today, a clan is a legally recognized group in Scotland, and it has a 'corporate identity' by law (the same way a business or company has).

Get serious about finding your Scottish ancestors!

Then we recommend a visit to the ScotsFamily website.

They offer a professional and complete Ancestor Search Service.

Best of luck with your search!

It's a 'noble incorporation' because Clan Chiefs are considered noblemen of Scotland and this leads to a clan being officially referred to as 'the Honorable Clan of (fill in the clan name!)….'

Under Scottish law, a clan is recognized as the chief’s heritable property - he legally owns it and is responsible for its administration and development.

Those of us who are of Scottish descent, whether we live in Glasgow, Melbourne or Oklahoma, are proud of our heritage.

If you have Scottish ancestors, you may want to learn more about the clans of Scotland, and to find out whether or not you belong to one..... unfortunately it's not always easy to get to the truth of the matter!

Although certain Scottish surnames (last names) are traditionally associated with a certain clans, just having the correct name alone is no guarantee that you 'belong'.

In spite of the difficulty in finding out exactly who your Scottish ancestors were, and which clan they belonged to, in reality today anyone with the Chiefs' surname is considered a member of the clan.

Even if you don't have the 'right' name, if you offer allegiance to a Chief, then you can be considered a member of his clan.

In both these situations though, it's entirely up to the Clan Chief to decide whether he accepts you or not!

One of Scotland's oldest clans, Clan Buchanan, has appointed a new Clan Chief!

John Michael Baillie-Hamilton Buchanan, a sixty-three year old retired Civil Engineer will be the new Clan Chief and his inauguration is due to take place in October of this year and will lead the first Clan Parliament since 1681.

History in the making! You can get more details HERE

The clans of Scotland have survived for centuries and although belonging to a clan today is quite a different experience to the one you may have had 300 or 400 years ago, many of the traditional values and feelings are the same.

That's another example of the enduring magic of Scotland!

If you're part of a Clan organization or group, and would like for you all to be able to wear your clan's tartan as a waistcoat rather than (or maybe in addition to) a kilt, check out ElaineMackenzieWaistcoats.com  for a unique opportunity to do just that!

An authentic, made in Scotland product.

Totally custom, clan tartan waistcoats. You can personalize your waistcoats in a huge variety of ways.