Dumbarton Castle (from the Gaelic 'Dun Breatainn' meaning 'fortress of the Britons') is perched 240 ft above the town of Dumbarton.

The twin peaks of a volcanic rock (formed approx. 340 million years ago) are known as Dumbarton Rock and provide the perfect defensive position. This is enhanced by the fact that the outcrop has water flowing on three sides - the River Clyde in front of it and the River Leven on the other two.

This rock was home to a settlement called Alcluith (meaning 'Clyde Rock'), whose first records appear as early as 450AD. There was likely a simple fortress as part of this settlement, "Dun Breatann" meaning 'Fortress of the Britons'.

From the top of the western peak, White Tower Crag (which is approx. 240 ft high), you get an incredible view of the surrounding area, being able to see as far as ten miles in certain directions on a clear day. This would have made it a perfect look-out post and added to the very impressive defensive position of Dumbarton Castle.

Over the next several hundred years, Dumbarton Rock was besieged, fell, was regained and fell again before the settlement there was destroyed by Viking raiders.

The second stage in the history of Dumbarton Rock begins in the 13th century, when documentation suggests that a medieval castle was built on the the summit by Alexander II of Scotland.

Only the Portcullis Arch (built in the 1300's) and the Guard House(built in the latter half of the 16th century) remain today.

The third stage of the castles' development took place between the late 17th and late 18th centuries. The was left of the existing castle structures were destroyed, and yet another castle was built on this lofty perch.

Artillery fortifications and the 'French Prison' are about all that's left today, with very little of the medieval castle (and none of the earlier one) still standing. 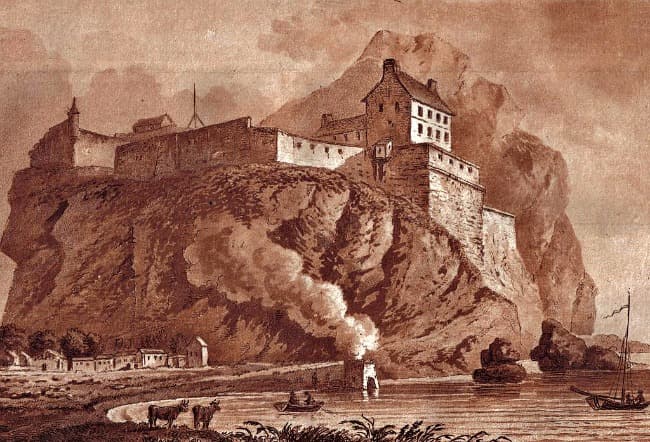 Dumbarton Castle is generally open to the public between April 1st and November 31st and visitors should be aware that it's one of the more strenuous Scottish castles when it comes to viewing and touring.

The whole site is rocky (that's probably obvious!) and there's a fair bit of walking and several sets of steps to get from one exhibition or area to another. All of this makes it unsuitable for anyone who has limited mobility or is physically disabled.

If you are fit and ready to tackle it, there are 547 steps to climb in order to reach the 'White Tower Crag', but if you'll reach the White Tower remains and be rewarded with magnificent views. On a clear day you can see all the way to Ben Lomond which is approx. ten miles as the crow flies.

**As of Spring 2022 there is no access to Dumbarton Castle and the Rock due to a survey to assess climate change, and general environmental, damage (this is part of a national program which is looking at over 200 Scottish properties).

There is no firm date for re-opening at this time.