Urquhart Castle is one of the largest castles and strongholds of Medieval Scotland.

Today it's regularly in the top ten tourist attractions in Scotland.

The castle ruins are fascinating and when you touch the stones you can almost feel the echoes of it's long (and sometimes bloody) history.

As with so many Scottish castles, Urquhart has a magnificent and dramatic setting and is strategically placed in terms of defense.

It sits perched on a rocky peninsula high above, and surrounded by the deep waters of famous Loch Ness (home of the fabled 'Nessie' or Loch Ness Monster).

Excavations have provided evidence of settlements in this area going back to as early as 2000BC, and it seems that during the 6th or 7th century, a simple fort may have existed at the location of the present castle and may have been the home of Bridei, King of the Picts.

However, the first records of Urquhart castle indicate it existed in the early 13th century, probably built by the Durward family.

It gained the title of a 'Royal Castle', and was used by Kings of both Scotland and England - King Edward I of England occupied it in 1296, King David II of Scotland stayed there in 1342. 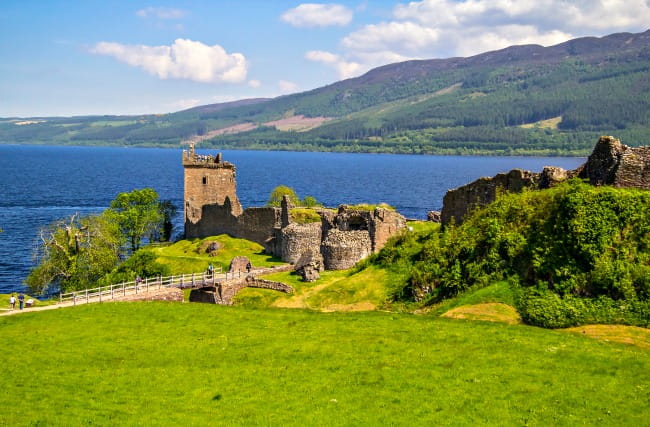 Urquhart castle was at the center of a tug-of-war between the English and Scottish which lasted from the 14th to the 17th century. It was also fought over by the Crown, the Clan MacDonald and the Grant family.

After several turbulent centuries, the castle was abandoned in the early 1600's, and was nothing more than ruins by the end of that century.

You may never have thought of ruins as spectacular, but that's what these are.... and the backdrop of the mystical and enigmatic Loch Ness doesn't hurt either! 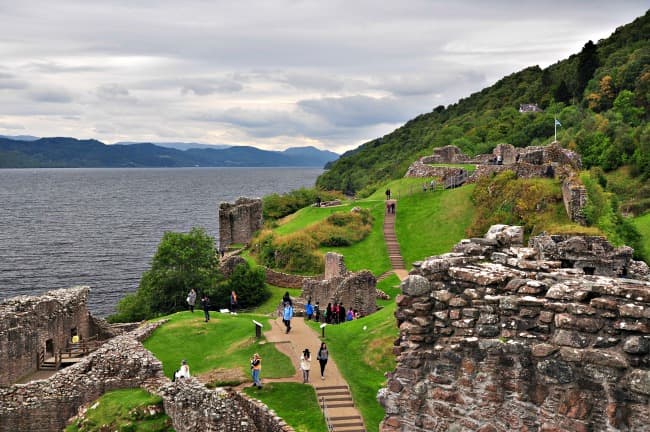 The unique setting of this castle and the meticulous maintenance make it easy to get an idea of how impressive it would have been in its' prime.

From the remains of the kitchen, to Grant Tower and it's narrow, spiral staircase and incredible loch views, this is one of the Scottish Highlands 'Must See' castles.

A personal recommendation here would be to take one of the boat trips that you can find offered at the nearby village of Drumnadrochit.

To feel the movement of cold waters of Loch Ness under you as you see the formidable ruins of Urquhart Castle rising from the rocky shoreline is an incredible experience.

It gives you a feeling that I can't explain - but one that I can highly recommend! 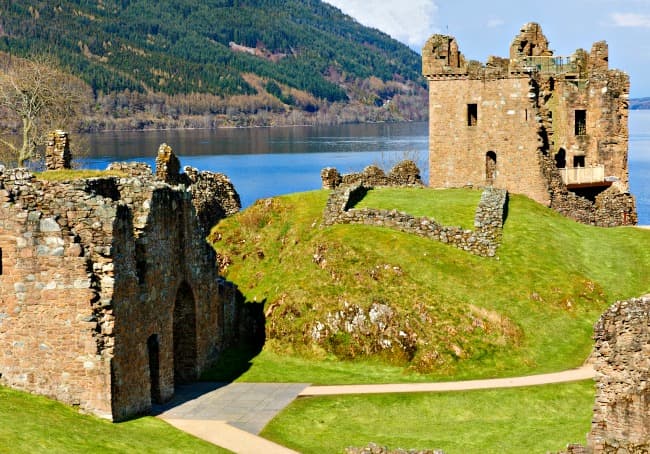 Urquhart Castle is open daily to visitors year round. Hours vary seasonally and it is closed Christmas Day and Boxing Day (the day after Christmas), with shorter hours on New Year's Day.

There is a fair bit of walking involved to really get a feel for these incredible castle ruins, but it's worth every step. For those who have limited mobility or other disabilities there are manual and electric wheelchairs and a photographic guide available.

A comprehensive visitor center, a well stocked gift shop and a large cafe make your visit even more enjoyable.

And don't miss the boat trips and Loch Ness Visitor Center in nearby Drumnadrochit, you may even catch a glimpse of Nessie on your travels!