An adorable Scottish Fold kitten is an irresistible little teddy bear and can melt just about anyones' heart!

With their round faces, chubby bodies, folded ears and sweet wide-eyed expression, they look more like little teddy bears than your average kitten (and that's saying something!).

And, that's probably because they're not your average kitten.

Scottish Folds are unique in their appearance, and have a mesmerizing quality that makes them quite unlike any other breed. 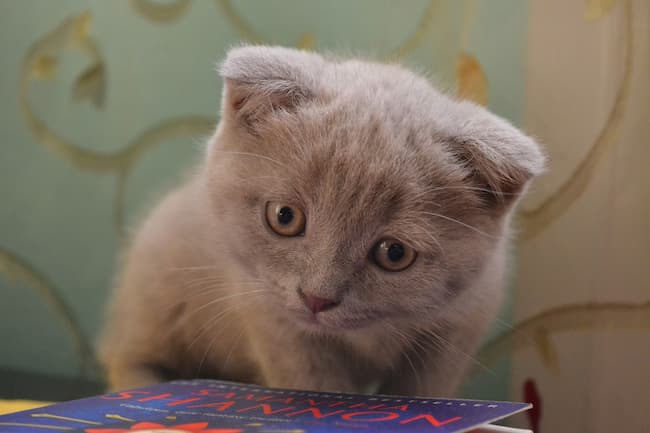 About The Scottish Fold Kitten

Scottish Fold cats originated in Scotland in the mid 20th century, and their very distinctive ears (which 'fold' forwards over their heads and give the breed their name) seem to have developed spontaneously as a result of a specific genetic trait.

Although it is a dominant gene, not all kittens are born with folded ears (Fd), and straight ears (fd) are just as common (and acceptable).

When the breed was in the early stages, cats were bred for the folded ear set and many times two cats with this type of ear would be mated. 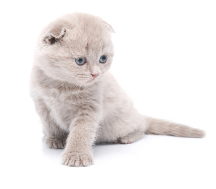 However, the same gene that produces these adorable ears, also seems to be responsible for a bone abnormality called 'congenital osteodystrophy', which mainly afflicts Scottish Fold kittens that are the result of mating two cats both of whom have the 'folded' ear set.

A kitten born from this type of breeding has about a 30% chance of developing bone/joint issues.

This condition causes bone lesions and the stiffening or thickening of bones and joints, especially those in the tail, paws and leg joints. It is a treatable affliction but obviously much better avoided if possible.

Breeding a Fd cat (folded ears) with an fd cat (straight ears) seems to significantly reduce the chances of the kittens having congenital osteodystrophy. Responsible breeders do this as a matter of course, and 'outcrossing' with either the British or American shorthair breeds is also encouraged.

By following these protocols, breeders of Scottish Fold cats have managed to help the breed return to it's original robust health.

Something you may not realize is that not all Scottish Fold kittens have the classic folded ears. 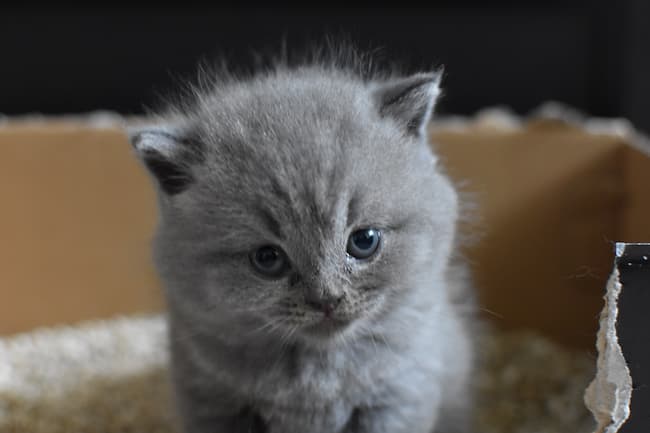 In fact, because responsible breeders didn't want to risk the bone abnormality associated with breeding two cats with folded ears together, on average only about 50% of kittens now have this trait.

But that doesn't mean 50% of each and every litter - some litters may have only one Fd kitten (or even none at all), others may have 3 out of 5 Fd's. It's nature at her most unpredictable!

Also, there's a variation in the degree of folding - anywhere from a single 'loose' fold to a tight 'triple' fold.

Also, the kittens are always born with straight ears, and they don't begin to show the 'bend' (that should develop into the fold) until they're about 3 weeks old... but that's not the end of it.

Sometimes the ears may start to fold, then 'change their minds', ending up looking like straight (or fd) ears, but today there's some discussion over whether they're actually Fd after all.

Even Scottish Fold kittens whose ears continue to 'fold', it takes several more weeks (usually up until the kitten is about 3 months old) before even an experienced breeder can tell whether or not the fold is going to be a tight 'show quality' one, or of the looser 'pet quality'.

Although new owners are sometimes worried that a kitten with tightly folded ears may suffer from ear infections, mites or other problems, this is rarely the case.

Of course, if your kitten does have folded ears, do check inside them periodically to make sure there are no surprises lurking there!

If you've got your heart set on a Scottish Fold kitten, choosing a reputable and knowledgeable breeder is one of the most important things you can do. 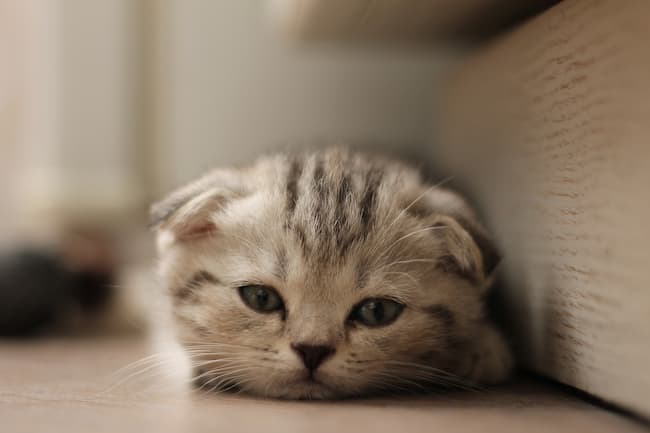 Because of the genetic mutation that causes congenital osteodystrophy, you need to make sure that your kittens' parent are not both Fd cats, that is Scottish Fold cats with folded ears.

Even then, it's important to check for any stiffness or 'immobility' in the kittens' tail and that it's not abnormally short.

Also, check his/her legs to make sure they're malformed, very short, or stiff and that the toes aren't splayed. Watch the way the kitten moves and avoid any that seem to suffer from lameness, or limited mobility.

Of course, Scottish Fold kittens are just like any other kittens, and it's important to take the time to look for the general signs of a good feline health - both in the parents and the 'babies'.

Signs of a healthy kitten include:

In addition to all of this, it's a good idea to only buy a kitten whose parents have been DNA tested for Polycystic Kidney Disease (PKD), and are certified free of this disease. Any kitten or cat who tests positive for the condition should be spayed or neutered, and NEVER used as breeding stock.

PKD is a genetic condition and is the most common cause of feline kidney failure. It's most often seen in Oriental breeds such as Persians and Himalayans, but is also found in American shorthairs and Scottish Folds.

It's a 'degenerative' condition which means that it usually doesn't show up until a cat is somewhere between 3 and 10 years old (on average it's around 7).

It's both progressive and irreversible, the numerous cysts on the kidneys (which give the disease its' name) can't be treated or removed, and the only care that can be given is to help manage the resulting kidney failure.

How long a cat with PKD lives depends on how severe their individual condition in terms of how many cysts they have, and how quickly they grow.

This is not something any cat (or cat owner) should have to go through though, so make sure that your Scottish Fold kitten isn't at risk.

First of all, you want your kitten to be at least 9 weeks old before he/she leaves his momma and siblings. 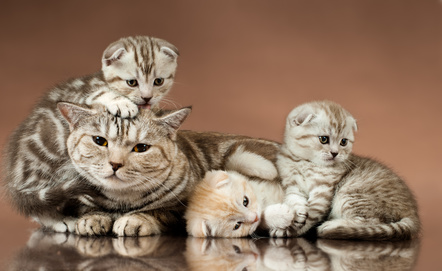 If you're hoping for a 'show quality' Scottish Fold kitten, you will likely need to wait until it's at least 12 weeks old before the breeder will be able to estimate whether or not the ear fold is going to be correct.

Look at the parents of this litter, they should be calm, confident and good natured. Personality traits are in the genes just the way physical traits are, and a bad-tempered or timid cat may produce kittens with the same characteristics.

Of course, with Scottish Fold kittens this is less likely due to their naturally calm, placid and loving dispositions, but it's still something to watch out for.

It also goes without saying that the parents should look healthy and well cared-for.

Although Scottish Folds don't have any more hearing problems than your average breed of cat, if you're buying a pure white kitten, be absolutely certain you're buying from a responsible breeder who has healthy cats.

White cats with hearing difficulties, or a family history of them, should never be used in breeding programs, and reputable breeders follow these guidelines.

A good breeder will have tested their cats for diseases such as PKD (Polycystic Kidney Disease) and Famililal Hypertrophic Cardiomyopathy (FHC), and be knowledgeable about the specific health risks associated with this breed.

They should discuss these with you and be able to answer any questions you have.

Don't be surprised if the person you're buying your precious baby from wants to ask YOU questions as well.

In fact, that's a sign of a responsible breeder who cares about their animals and wants to make sure that their kittens go to homes and families who are willing, and able, to take care of them properly.

These cats are very loving and affectionate, bonding closely with their owners. If your kitty is going to be spending 8 hours a day alone, a Scottish Fold may not be the best choice for you. They crave companionship.

Of course, if you have other pets to keep him (or her) company, that helps... or you could always buy two kittens.

Taking care of your Scottish Fold is very similar to taking care of any kitten. He/she needs a good nutritious diet, vaccinations and de-worming, and lots of love and attention. 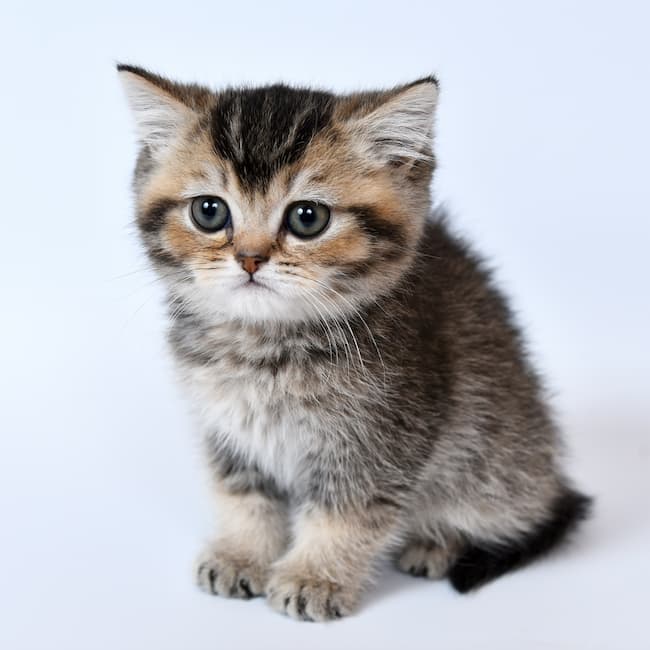 Grooming is also a necessary part of taking care of Scottish Fold kittens. The thick, plush fur of the short haired cats just need to be combed every few days, but the long-haired variety require more attention.

We'd recommend using a steel comb every other day to prevent their fur from getting tangled or matted.

This breed is not over-active by any means, but they do like to play (doesn't every kitten/cat?). Make sure your kitten has a variety of toys to keep her entertained, and a scratching post is also recommended. Of course a litter box is a necessity!

If you're interested in helping homeless or endangered Scottish Folds, then Scottish Fold Rescue, Inc. would love to hear from you!

They rescue, care for, and re-home Scottish Fold cats that are in need, homeless, or in danger.