Morag of Loch Morar isn't as famous as her 'cousin' Nessie, and hasn't been seen anywhere close to as often, but this isn't at all surprising when you compare the difference between these two Scottish lochs.

Loch Ness has always been relatively well populated and traveled, with a major city, castle ruins, and a busy road running the full length of it's western shore since 1833.

Loch Morar on the other hand is comparatively isolated and remote, with the southern side, and about one third of the northern side, accessible only by foot or by boat, or in some places by bicycle.

The village of Morar itself is right off the A830 (which continues north to Mallaig) and minor roads from there take you to the western edge of the loch.

There are well posted walking paths and trails around the loch, which give you spectacular views of the beautiful terrain. Healthy exercise in gorgeous natural surroundings. Win-win.

Peaceful Loch Morar is situated on the far west coast of Highland Scotland, about a mile from the open ocean and only about 70 miles from Loch Ness.

Created by glacial erosion around 10,000 years ago, it’s almost twelve miles long, and with a maximum depth of 1,017 ft it’s the deepest freshwater lake in the UK.

At the western end of the loch there are several islets and water flows out from the Loch into the open water of the Sound of Sleat through the River Morar, which at about 1/2 mile long is one of the shortest rivers in the UK.

The harbor of Mallaig (which is about 2 1/2 miles from Loch Morar, as the crow flies) is a busy with fishing vessels. 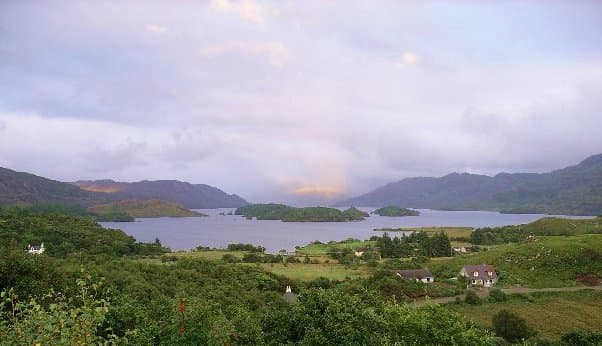 The surrounding area is beautiful, wild, rugged and remote, making it ideal for an ancient creature who prefers solitude.

As the legendary Scottish loch creatures seem to thrive in the cold, deep, dark waters of Scotland’s lochs, Loch Morar might just be the ideal place to find one.

Local residents have claimed to see an strange creature in the loch since the 19th century.

There are over thirty sightings of Morag that we know of, with the earliest recorded sighting being in 1887.

Considering how remote Loch Morar is and that it has no hordes of daily tourists, this is pretty impressive. 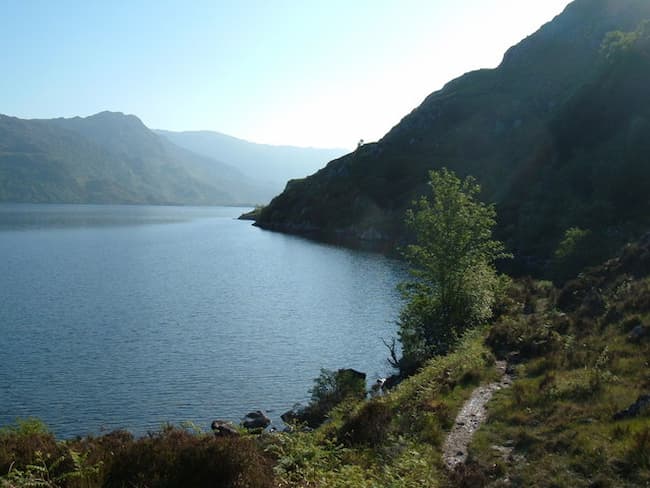 View from the eastern end of Loch Morar

Thanks to a Scot named Alexander Carmichael who, during the 1800's, was busy collecting folklore, stories, and songs  about a whole host of Celtic historical subjects, there are written records (originally in Gaelic) of sighting of Loch Morar's creature, nicknamed 'Morag'.

A decade or so ago a researcher named Dr. Donald Stewart (who was working on Edinburgh University’s Carmichael-Watson Project) found some previously unknown writings belonging to Alexander Carmichael and written in 1902.

They're both important, and fascinating, and show how local people described and thought about Morag well over a hundred years ago.

Although the creature seen and written about in the twentieth and twenty-first century is often described as reptilian or snake-like, folk-lore descriptions prior to the late 1800’s are much more colorful, and she is occasionally given an entirely different persona and appearance.

According to old legends, Morag was known as a harbinger of death, heralding a death of a member of the Morar family or a clan defeat. She was a source of fear for many locals.

In his writings from the late 1800’s and early 1900’s, Carmichael gives us a whole host of details including these:

In one of his later texts, Carmichael shares a totally different representation of Morag as being..

These descriptions likely owe much more to ancient folklore than they do the the 'reality' (which is a subjective word in this situation!) of the actual loch creature's appearance.

Sightings of Morag in Loch Morar

The vast majority of recorded sightings of Loch Morar’s monster, Morag, were made by at least two, and in one instance as many as nine, people simultaneously, and the majority of them describe a remarkably similar creature.

Here are some of the most descriptive, eye witness accounts of seeing Morag:

1948: nine people out on the loch in a boat claim to see a serpent-like creature that they approximate was 20 ft long on the loch, in a similar location to the 1887 sighting.

1968: a barman from the Morar Hotel who was out in a boat on Loch Morar described seeing a black smooth skinned creature traveling across the loch. It’s neck was extended five or six feet out of the water, about eighteen inches in diameter and topped by a small, flattish, sneak-like head. He said it made minimal disturbance to the water around it and he got the impression it was being paddling along under the water, or being propelled by something other than a tail. When he got close to it (within 300 feet) the creature turned away and slowly submerged until it disappeared from sight.

1969: a fisherman in a boat in Meoble Bay (water is only about 16 ft deep here and very clear) saw what he described as a ‘monster lizard’ lying on the bottom of the lake, looking up at him. He said it was approx.. 20 ft long, gray brown in color, with a snake-like head, and had four legs with three toes on each foot. This is the most detailed description of Morag that has been given, likely because the creature was stationary, and it fits with the general description given by everyone who has ever seen her.

1969: two local men, William Simpson and Duncan McDonell who had been fishing from a motor boat on the loch and were moving across the loch at approx.. 7mph heard a splash behind them and saw something moving at speed towards their boat. Seconds later an unidentified creature, approx. 25-30 ft long, with brown skin, a snake-like head and three humps, collided with their boat (McDonnell said at the time that he believed the collision was accidental on the part of the creature). Panicked, McDonnel hit and pushed at it with his oar, while Simpson grabbed his rifle and fired a single shot at the creature, which then disappeared back under the water of the loch.

After he and his friend Duncan McDonell saw Morag in August 1969, William Simpson said ‘There is no doubt in my mind that there is a large monster, maybe more than one, in Loch Morar’.

1971: a local resident, Ewen Gillies, whose cottage had a clear view of the loch noticed a huge creature in the water of the loch, about half a mile from his home. He described it as being black and having a long neck, small head, and two or three humps. According to Gillies it was moving slowly when he saw it.

1975: two brothers on a bird-watching expedition were driving in the area where the Morar River flows out of the loch into the ocean barely a mile away, when one of them saw what he described as a 20ft long creature with a snake-like head, smooth, brown skin and powerful hindquarters rise from a shallow pool of water and plunge into the loch.

2013: a couple, Doug and Charlotte Christie who were staying in a B&B on the shores of the loch saw a large black shape, approximately 20 foot long and looking 'a bit of a submarine', or a whale, in the water three times over a two day period. Doug said 'I could not believe my eyes. I am not the type to get excited unduly, but this just couldn't be explained.' The owners of the B&B where the Christies were staying, Michael and Catherine MacNeil, also witnessed one the Christie's sighting and took a photograph which you can see here. Afterwards Michael said 'there was a largish black object, maybe two very close together, in the middle of the two mile wide loch. I have seen otters in the loch, but this was no otter. Much bigger and almost motionless.'

There is another sighting of Morag around this same time by Alistair MacKellaig, from Moraig, who was with a group out fishing on Loch Morar (I was unable to find a confirmed date for this sighting).

He says they all saw Morag from a distance of only about 50ft, and describes her as a ‘classic three humps moving through the water with the head underwater’.

Alistair says he has no doubt that what he and his companions,  and the Christie family,  saw was the same creature.

2013: A couple having a picnic in front of Swordlands Lodge on the banks of Loch Morar saw something large ‘zig-zagging’ in the water near the shore in Meoble Bay.

What type of creature could Morag be?

General descriptions of Morag, the creature that has been seen in Loch Morar, match a plesiosaurid type creature, similar to the world famous Nessie, the Loch Ness Monster.

Plesiosaurs were ancient marine reptiles who lived in the oceans, and inland waters around the world, during the time of the dinosaurs.

There were many different types of Plesiosaur, with a huge variety of sizes and slight differences in appearance, usually related to the length of the neck, shape of the head and general overall size. 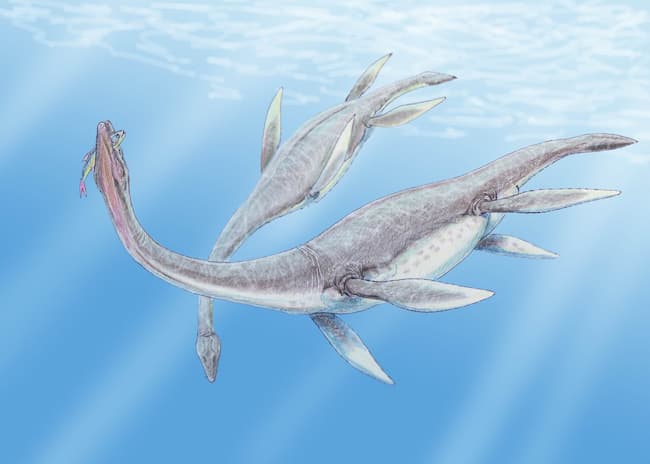 Here are a few of the different types of Plesiosaurs that existed during prehistoric times. 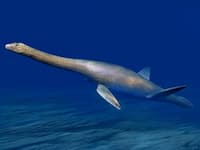 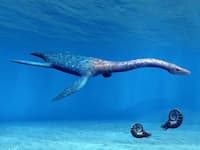 
Are you fascinated by the strange and unidentified creatures that live in Scotland's lochs?  Would you like to know more about them, as well as all the other weird and wonderful monsters and creatures of British folklore, legend and yes, even recent eyewitness accounts? Then this might be the book for you!y

The Beasts of Britain by Andy McGrath