History of the Dandie Dinmont Terrier

The history of the Dandie Dinmont Terrier as an individual, recognized breed goes back to the early 1700's. It appears as though this was the first, or at the very least, one of the first, breeds to distinguish itself from the melting pot of small dogs used by farmers and hunters in Scotland hundreds of years ago.

The majority of native Scottish dog breeds disentangled themselves from the more generalized pool of working dogs in the 1800's.

Dandie Dinmont Terriers were first and foremost working dogs, bred to hunt vermin such as badgers and otters, as well as rodents, and their body shape helped them follow their prey into their burrows underground if necessary.

At one point in history they were actually pretty famous due to a book written by Sir Walter Scott.

However, their popularity has waxed and waned over the years, and they are now on the Kennel Club's (UK) Vulnerable Native Breed list, which means they are at risk of being lost forever. Sadly, these wonderful little dogs have even been called 'Scotland's Forgotten Breed'.

Beginnings of the Dandie Dinmont Breed

As with all the native Scottish dog breeds, the earliest beginnings of the Dandie Dinmont Terrier aren't completely clear. Dogs were used mostly for working purposes hundreds of years ago, and so people saw no need to keep written records of their dogs, or their breeding.

We do know that this type of terrier was popular with gypsies and tinkers throughout the hilly Borderlands area (both north and south of the Scotland/England border). One gypsy family, the Allans, from Northumberland in England is said to have been breeding type of terrier that was to later be named the 'Dandie Dinmont' since the early 1700's.

However, it was a chance meeting between a Scottish farmer named James Davison, and the famous Scottish historical novelist, poet, historian and playwright, Sir Walter Scott, that is to be thanked for both the popularity and the name of this adorable little Scottish terrier breed.

After meeting Davison, Sir Walter Scott fell instantly in love with the farmers terrier dogs. So much so, that when writing his novel ‘Guy Mannering’ (published in 1815) not only did he base the character Dandie Dinmont (a farmer) on Davidson, he also added six ‘Mustard and Pepper’ terriers similar to the ones he was so enamored with.

He also got very poetic about these little dogs, and once described them this way:

'He evolved from the Scottish hillside, the grey mists forming his body, a bunch of lichen his topknot, crooked juniper stems his forelegs, and a wet bramble his nose'

(A bramble is the Scottish word for a wild blackberry) 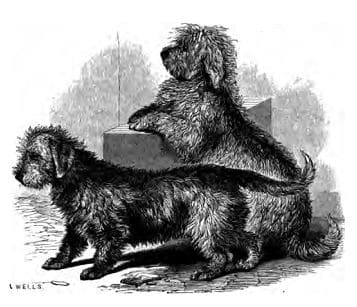 Sir Walter Scotts’ book was hugely popular, as were the little Mustard and Pepper terriers he had written about.

The real life version of these dogs almost immediately became known as Dandie Dinmont’s Terriers, although they quickly became just Dandie Dinmont Terriers (as in no ‘s’).

Many other famous people of that time including Queen Victoria also fell in love with the dogs Sir Walter Scott had written about and this boosted their popularity.

Scott was gifted two of the little terriers he admired so much by Davidson, named Ginger and Spice.

He happily added these dogs to his Scottish Deerhounds (who he once called ‘the most perfect creature of Heaven’).

One of his breedings of the Dandie resulted in a dog called The Mertoun Dandie, who was the father of Vixen, the founding mother dog of the Dandie Dinmont breed.

So, Vixen was one of the foundation pair that created the Dandie Dinmont breed as we know it today, but who was the founding father?

Researchers believe that he was a little dog known as 'Old Pepper' who was found in a trap on the fifth Duke of Beccleuch's Estate in Selkirk in 1839.

So, all in all, Sir Walter Scott not-quite-single-handedly both gave the breed it’s name, and provided the dogs who are the direct ancestors of all Dandie Dinmonts today.

The Dukes of Beccleuch  have had a long-standing relationship with Dandie Dinmont Terriers.

One of the first paintings of this breed was done in 1770, by the artist Thomas Gainsborough. It featured the third Duke of Beccleuch with a small, very Dandi-Dinmont-looking terrier at his feet.

Over the centuries this breed has continued to be associated with this aristocratic family. Most recently, in 2015, the tenth Duke of Beccleuch (Richard Scott, also chief of Clan Scott) gave his blessing for the Dandie Dinmont Terrier breed to adopt the black and white Walter Scott Tartan, making them the only dog breed with their own tartan!

Unlike many of the old Scottish dog breeds, the Dandie Dinmont has not changed very much in appearance since that very first painting back in the 1800’s. 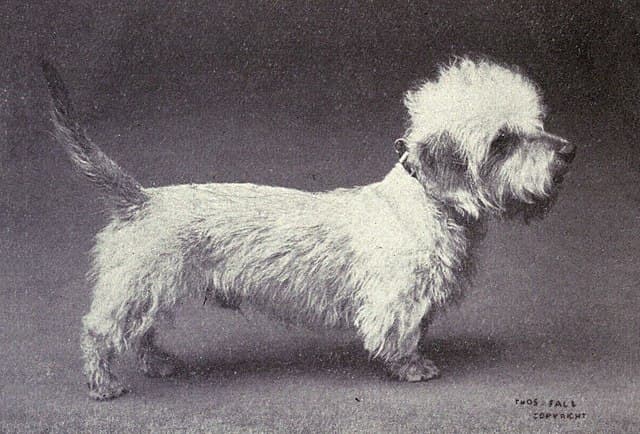 It’s interesting to see that the breed standard still calls for the allowable coat colors of mustard and pepper. Mustard is basically tan, and pepper is gray, but I prefer the imagery of the first description.

The recognized breed standard has also stayed predominantly the same as the one first drafted by the Dandie Dinmont Terrier Club way back in 1876. This club itself was established in 1875, and is the third oldest breed club in the world.

Although the Dandie Dinmont Terrier became very popular as a result of Sir Walter Scott’s novel, they were at heart a working terrier, and many people who were attracted to their fictional counterparts were looking more for a companion dog than a working dog.

Queen Victoria’s love for Scottish Terriers also helped bolster the Dandie Dinmont’s popularity, but for various reasons their popularity fizzled out somewhat over the following years.

This is sad, because although they were originally a working breed, these little dogs also do make excellent companions. They're gentle, loving, easy to train, and good with children. They're also one of the very few terrier breeds who can get along well with cats!

A few dedicated breeders worked hard to keep the breed alive, one of them being Eaglesfield Bradshaw-Smith who bred Dandies for just over forty years. Bradshaw-Smith owned ‘Old Ginger’, the son of ‘Old Pepper’, the granddaddy of the Dandie Dinmont Terrier breed. 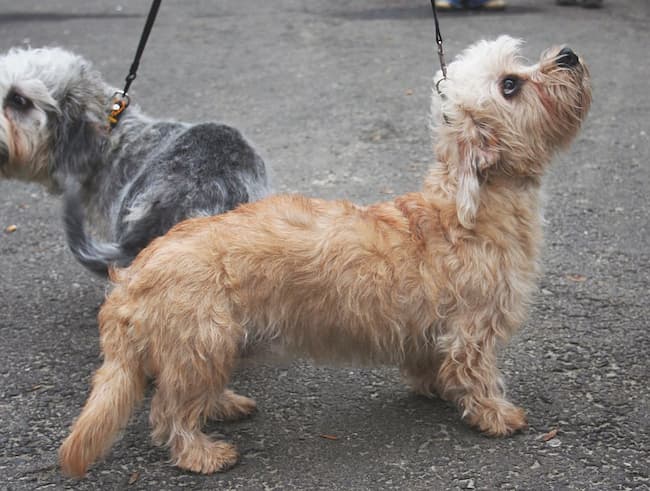 For whatever reason, this breed has never got a firm foothold in the popularity stakes and in 2016 become recognized as a Vulnerable Native Breed  (that year the Kennel Club in the UK registered on 90 puppies, and the AKC registered only 75).

We can only hope that the dedication of Dandie Dinmont breeders and enthusiasts can keep this special and ancient breed moving forward.

CLICK HERE to learn more about the Dandie Dinmont Terrier