History of the Cairn Terrier

The history of the Cairn Terrier stretches back further than most other native Scottish dog breeds.

It may well be one of the oldest breeds to have come out of Scotland, and is believed to be the foundation of other well-known Scottish breeds in cluding the Scottish Terrier, the Skye Terrier and the West Highland Terrier.

It's well known that there was a common pool of terrier-type dogs in Scotland (particularly in the Scottish Highlands) dating back to at least the 14th century, but it wasn't until the early 1800's that individual breeds with specific looks and behavior traits emerged from this pool.

Experts and historians believe that the Cairn Terrier may have existed as a specific, unique breed on the Isle of Skye and even possibly in the Scottish Highlands as early as the 15th century, although they were originally referred to as 'short-haired Skye Terriers'.

During the 1600's when King James I and VI reigned (he was both King of Scotland as James VI, and King of England  and Ireland as James I, in his lifetime which was 1566 to 1625), he sent several of what he called 'Earth Dogges' to the King of France.

It's also known that he considered these little dogs to be extremely valuable. 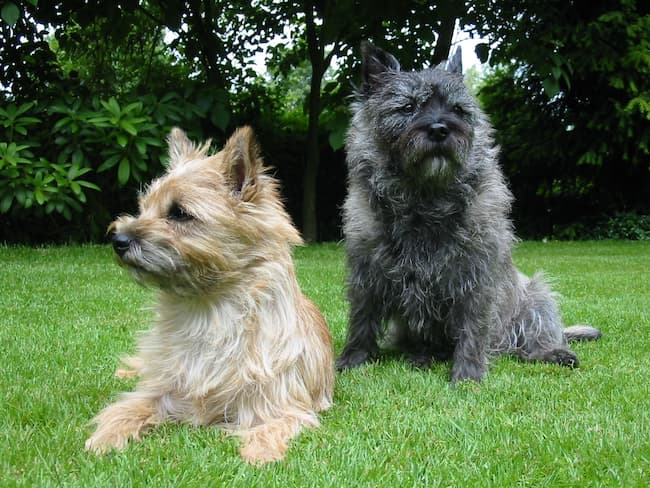 Although the very beginnings of the individual terrier breeds in Scotland are murky and confusing at best, but the Cairn Terrier is believed by some to be the oldest of the short legged breeds, and the foundation for other Scottish terrier breeds such as the Scottie and the Westie.

However, you’ll find others who believe the Scottish Terrier deserves that honor.

All we know for sure is that these working ‘earthe dogges’ were on the job in Scotland long before anyone thought to write about them!

In the Wizard of Oz, Dorothy's little dog Toto was played by a Cairn Terrier (although in real life the dog in question was female).

In the book, Toto was described as 'a little black dog with long silky hair and small black eyes that twinkled merrily...' and the book's illustrations of Toto looked a lot like a Cairn Terrier, although an argument could be made for it being a Scottie too.

Although many people wouldn't necessarily be able to identify the breed or use it's correct name, Cairn Terriers have actually appeared in a LOT of movies, many featuring famous actors/actresses and their heyday was the 1930's and 1940's.

You can check out cairnterriermovies.com to learn more.

The Cairn Terrier breed originated in the western Highlands and islands of Scotland (including the Isle of Skye, birthplace of the Skye terrier), and early in it's history it was known as the short-haired Skye Terrier.

These hardy terriers were used by farmers, hunters, shepherds and crofters to keep wildlife and vermin such as foxes, badgers, otters, rabbits and rats at bay.

Cairn Terriers got their name because they excelled at routing their prey from their hiding places in cairns (piles of rocks that were used to mark memorials, or as boundaries or landmarks).

These little dogs enjoyed working in packs and were brave, tenacious and tough. 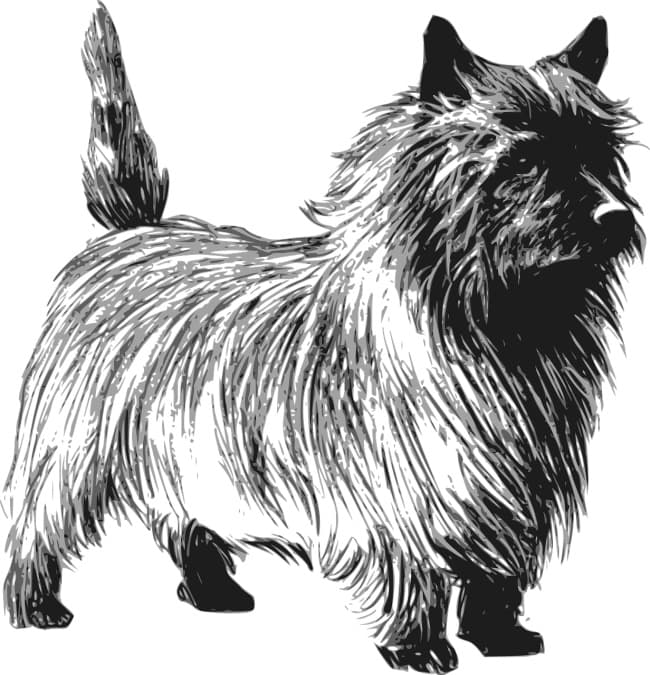 In fact there were times over the centuries when particular packs of Cairn Terriers were so 'game' (ie eager to work and courageous even when at risk of serious injury) that they could only be worked by their specific owners/keepers.

Farquhar Kelly of Drumfearn, on the Isle of Skye, may have owned some of the earliest ancestors of today's Cairn Terriers during the seventeenth century.

Another of the earliest bloodlines of the Cairn Terrier was founded by Captain Martin MacLeod of Drynock, Isle of Skye (a Highland sportsman and otter hunter).

His dogs were described as being a ‘silver-grey, short-haired Skyes’ (remember during the early days all short legged terriers on the Isle of Skye were called Skye Terriers).

After Captain MacLeod emigrated to Canada in 1845, the gamekeeper at Dunvegan Castle (John Macdonald) kept the Drynock bloodlines alive.

During the mid to late 19th century, several individual terrier breeds emerged from the pool of terrier-type dogs native to Scotland.

Enthusiasts and breeders concentrated on specific conformation, looks and personality traits and separate breeds such as the Skye Terrier, West Highland White Terrier and the Scottish Terrier appeared. These soon became popular across Scotland, and also south of the border in England.

Of the three short-legged breeds of terrier in Scotland, the Cairn Terrier was the slowest to become popular outside of the Isle of Skye and other geographically close areas on the Scottish mainland.

The Scottish Terrier and the West Highland White gained fans at a faster pace, perhaps because of the selective breeding for those aesthetically pleasing purely black, or white coats,  who knows?

For some reason their shared ancestor, the feisty Cairn Terrier, didn't gain popularity in the same way and it wasn't until 1910 that pioneer breeders such as Mrs Alastair Campbell and Mary Hawke were successful in persuading the Kennel Club to register the Cairn Terrier as a separate breed rather than the Skye Terrier variations. 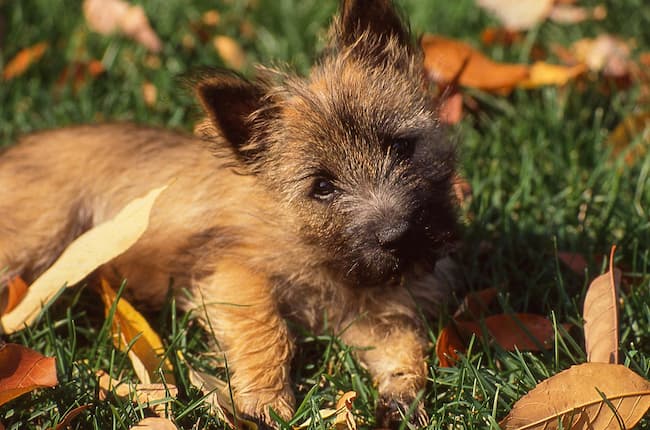 FUN FACT: What's in a name?

When the Kennel Club was trying to settle on a name for the individual type of Scottish terrier that became the Cairn, it wasn't just the short-haired Skye Terrier moniker that was considered.

Other suggestions for the name included the Otter Terrier, Hebridean Terrier, Waternish Terrier and the West Highland Terrier (but without the word ‘White’ in the name).

In their attempts to untangle the short legged Scottish terriers into individual breeds, official registration organizations and breed clubs sometimes  sometimes determined what a puppy would be considered to be according to it's color!

Inbreeding of all terriers prior to this had made for quite a melting pot!

The first Cairn Terriers arrived in the USA in 1913, and were recognized by the AKC that same year.

Founding breeders of the Cairn Terrier in the USA included Mrs. Henry F. Price (her Cairns were the first to be imported into the country) and Mrs. Byron Rodgers.

Once into the 20th century, and recognized by major breed registries, the popularity of the Cairn Terrier rose quickly, but the outbreak of WWI, and then again WWII put a halt to purebred dog breeding and caused a lot of damage to many breeds, almost wiping some out.

Since the mid 20th century, after the end of WWII, the Cairn Terrier never regained it's popularity or numbers and the number of Cairn Terriers being registered has been slowly dropping for decades. 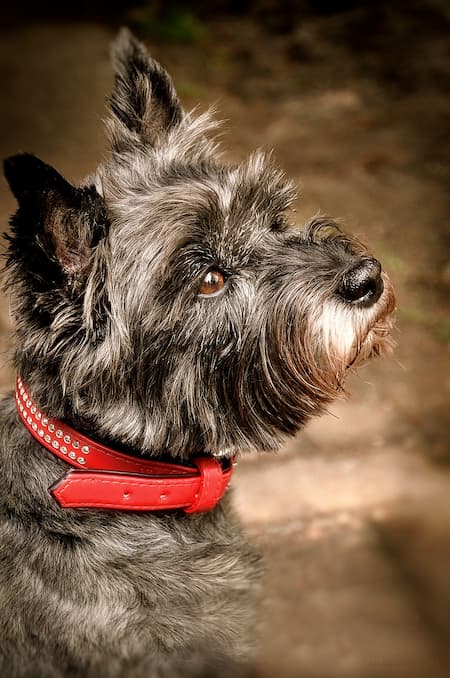 Although not on the Kennel Club's Vulnerable Native Breeds list, these courageous, feisty, loyal and active little dogs are at risk of disappearing one day.

In my opinion this would be a huge loss, and I hope that dedicated breeders, enthusiasts and Cairn Terrier lovers will be able to keep it from happening.

The Cairn Terrier Club in the UK once described this breed as 'the best little pal in the world'.... and we all need more pals, right?