History of the Border Terrier

The history of the Border Terrier likely stretches back as far as the Middle Ages (and possibly even as long ago as the New Stone Age) to a time when terriers were commonly used for hunting vermin and other small prey all across Britain, and much of Europe.

Early on all terriers in Scotland were just that, terriers. Considered to be one breed, it wasn't until the 1800's that individual terrier breeds began to be molded from that common gene pool. This happened due to hunters, farmers and terrier enthusiasts who bred dogs for certain characteristics depending on what they were used for, and personal preference.

In general, terriers are active, bold, tenacious, stubborn, scrappy, energetic and independent dogs with a high prey drive. Some are ‘softer’ than others in terms of personality, but overall they’re a force to be reckoned with. The Border Terrier fits right in! 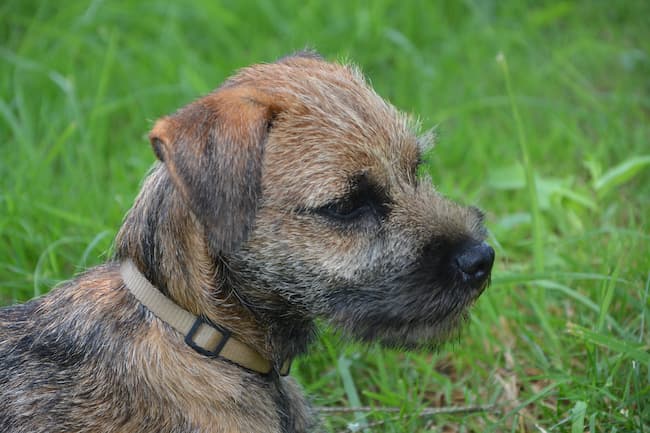 Early History of the Border Terrier

As with every other Scottish dog breed, the exact origins and timeframe for the development of the Border Terrier as a distinct breed is a little hazy, and some educated guesswork and interpretation of literature, art, personal accounts and so on are used to give us an overall understanding of it all.

As its’ name suggests, the Border Terrier (also at times referred to or known as the Reedwater Terrier or the Coquetdale Terrier) originates from what was known as the ‘border lands’ or ‘border country’ that stretches for some distance on both sides of the Scottish/English border.

The Border Terrier owes its name to the border lands where it originated, but also to the joint masters of the Border Foxhounds, Jacob Robson and E.L and Simon Dodd.

When they took over the master position in 1879 their pack of hounds and terriers became extremely successful.

By 1880 their terriers were specifically referred to, and called, Border Terriers, and both the Robson and Dodd family dogs played a huge founding role in the breed we know today.

They were also involved in helping the breed gain formal recognition from the Kennel Club in 1920 .

The borderland area is rugged and often uncultivated, where the terrain is hilly and the weather is often cold, wet and windy.

From early times, farmers and shepherd used this area for grazing their sheep, and their terrier-type dogs were kept to help protect the herds from predatory foxes, which were common in the area.

Moving into the mid to late 1800’s, when foxhunting became a popular sport with the upper classes, hounds were used to scent and chase foxes, and terriers joined the packs to ‘bolt’ the foxes should they try to hide underground.

‘Bolting’ basically means to go down a hole or burrow after the fox and chase it back above ground. Failing that, to bark loudly enough that the hunters could locate both dog and fox and dig the fox out. 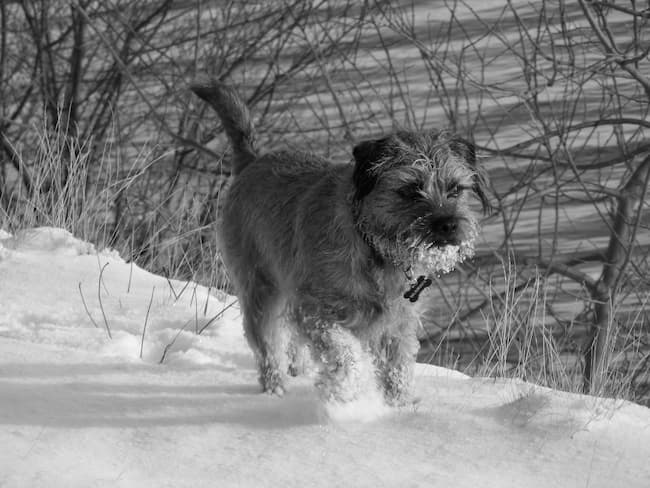 From written descriptions and photographs of this time it looks as though these early fox hunting terriers were likely the ancestors of today's Border Terriers.

This could explain the slight difference between Border Terriers and other Scottish terrier breeds. Border Terriers have slightly longer legs than most terriers and teeth which are comparatively large when compared to their head/body size.

There were several different types of terrier developing from the more generalized terrier-type dogs in this area at this time, including the Border Terrier, Bedlington Terrier and the Dandie Dinmont Terrier.

The Emergence of the Border Terrier

From around 1870 onwards, Border Terriers began to be shown for conformation in the show ring, rather than as working dogs at trials or in competition.

As with many other working breeds, not everyone was happy about this and many breeders and enthusiasts of the working Border Terrier were afraid the breed would lose the characteristics that had made it so successful at its job.

In the breed standard for the Border Terrier under ‘General Appearance’ are the words ‘essentially a working terrier’ and that sums up this little dog to a ‘T’.

Every feature of the Border Terrier was specifically created through selective breeding and extensive use of the dogs in a working environment. 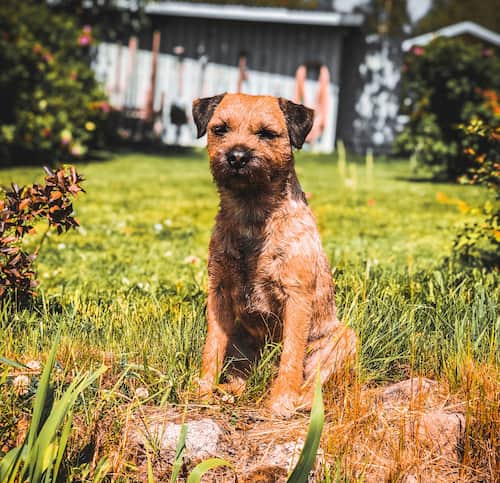 To be successful this terrier had to be intelligent, quick, have considerable stamina, be small enough to follow a fox underground (into what were often pretty small burrows or holes), get along with other dogs (it was used to hunt in packs, often with unfamiliar dogs so this was important) and be responsive to its owner/handler.

The importance, and relevance, of every single aspect of a dog's physical and emotional construction is shown here in an excerpt from an article on The Border Terrier Club of America website which discusses the coat and undercoat of a Border Terrier:

The BT standard is the only terrier standard that requires a loose-fitting and thick hide. The working Border’s hide allows him to work his way in and out of narrow openings underground in pursuit of his quarry and protects him from scratches and bites.

Gingerly pinching the skin is not a true test. Both hands should grasp the hide on a Border’s back and raise it slightly. This is the only way to feel the thickness and looseness of the hide. '

These adorable, feisty and friendly little dogs have quite the fan club! 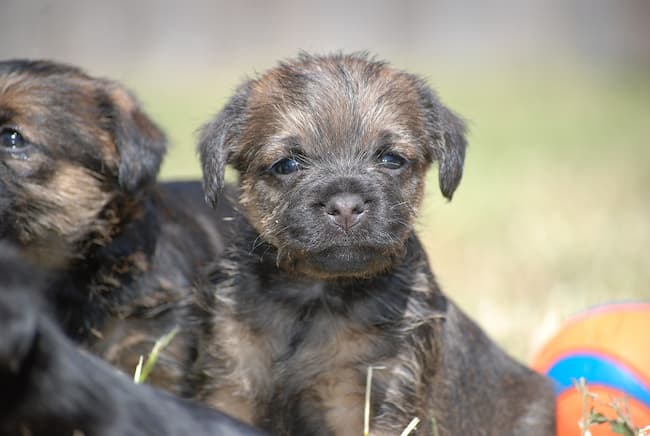 Breed popularity and show performance, often comes at a cost to a working breed. This is because show conformation and working ability often don't go hand-in-hand, and when a breed becomes widely popular it often attracts breeders who have more interest in finances than in bettering the breed.

Being a working dog, and also a happy, intelligent, versatile, affectionate and portable little dog, some breeders and enthusiasts were afraid the Border Terrier would suffer because of this.

Popularity of the Border Terrier in the UK peaked in 2008, but as of 2020, it was the second most popular terrier breed in the UK (after the Staffordshire Bull Terrier). Fortunately, at least so far as I was able to discern, it doesn't seem as though the Border Terrier has changed significantly since it's inception. Which is good news for everyone.

The Border Terrier in the USA

Only nineteen Border Terriers are reported to have been exported to the USA prior to 1930, and the breed was slow to gain admirers.

Records in the AKC archives show only five Border Terriers being registered in 1930, none in 1931 and twelve in 1932.

While the BTCA was being formed, Dr Merritt Pope (one of it’s founding members) led a concerted effort to have the AKC’s Border Terrier breed standard (which was the same as the Kennel Club’s breed standard) changed somewhat as he was concerned about maintaining the Border Terriers working conformation and characteristics rather than having it change due to show dog looks.

He spent a LOT of time and effort getting input and information from Scottish and English breeders so that he could put together what he felt would be the most representative and accurate breed standard for the Border Terrier in America.

It took four years, but in March of 1950 the AKC approved the revised breed standard.

If you’re interested in all the technical stuff and would like to see the various revisions and to learn more about how and why this was done, check out this page on the Border Terrier Club of America's website.

Between the 1930’s and the 1980’s the Border Terrier continued a slow but steady growth in popularity in the US, but with an increase in the establishment of successful breeding kennels and AKC sanctioned shows the hard working little Border Terrier became a firmly established breed and has cemented it’s place in the dog world of America.

Some of he most influential of the Border Terrier’s foundation kennels here in the US include:

* Dr Pope's Philabeg Kennels were among the earliest significant breeders and the last of these early kennels to disappear, somewhere in the 1950’s.

A second wave of important Border Terrier breeding kennels, whose dogs played a big role in the development of the breed include the

Local/regional Border Terrier Clubs across the USA include:

The Border Terrier is lucky to have a group of very dedicated breeders and breed enthusiasts in the USA who are working hard to maintain the breed in it's original form.

It's far from being one of the most popular breeds in the US (ranking towards the end of the top 100), but those who know and love the this active, spunky, happy, affectionate and lovable little dog will not be disappointed by that as it will help to keep the breed true to it's roots.

To get a quick overview of the Border Terrier size, traits, colors etc. Check out this page.

CLICK HERE to learn more about the Border Terrier