As with so many Scottish dog breeds, the history of Scotland's Bearded Collie is intriguing, complicated, and more than a little hazy.

The origins of this hardy, and hard working, herding dog begin long before anyone cared to keep written records about their dogs, or had the time to consider their history.

It's believed that shaggy or long-haired working and herding dogs existed in Scotland as early as 2000 BC, as groups of utilitarian working dogs, not individual breeds.

There are some written (or artistic) references to these 'shepherd's dogs' made as early as the 16th century, but it's not until the 1800's that the Bearded Collie was beginning to be mentioned as a individual type/breed.

Overall, a patchwork of ancient historical accounts, references, images and, yes guesswork, have gone into the recreation of the earliest origins of all Scotland's native breeds, including the Bearded Collie, and it's fascinating stuff! 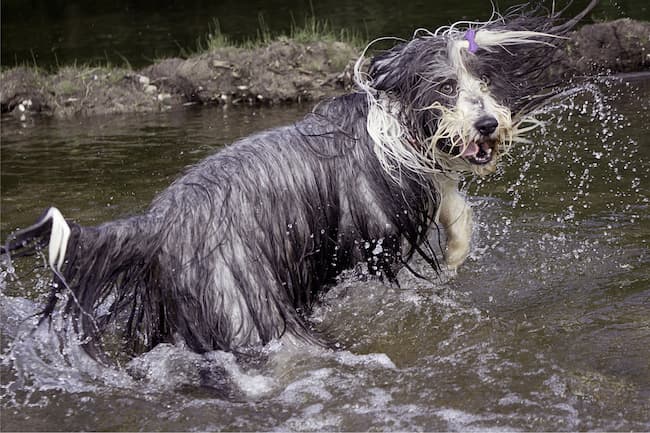 Over the centuries, the early Bearded Collies (as they're now known) were called:

In the very earliest days of the breed, before the breed standard was

Today, Scotland's Bearded Collie breed only has one other name, 'the Beardie', an affectionate nickname often used by those who love them.

The original 'Shepherd's Dog' of Scotland?

The hardy, and hard-working farmers, shepherds and crofters of Scotland used dogs to help them in their work, and the dog's ability to work was the most important consideration.

Looks were only important in as far as they helped the dog to do its job.

Why the name 'Collie'?

For many people the word 'Collie' conjures up a specific dog breed. Maybe a Border Collie or a Rough Collie.

Back in the mists of time, when dogs in Scotland were simply groups of dogs separated by the job they were kept to do, the word used to describe herding dogs was often spelled as Coaley, Coley, Colly or Colley.

As to why they were called this, as usual there is no certain answer, but many theories!

The most popular one, and possibly the correct one, is that in all it's different spellings, 'colly' was a reference to the black-faced Scottish sheep that these dogs were used to herd and protect. Black being the color of coal, and also a word used for something that had was blackened with soot, or was dirty.

Another alternative theory is that the Gaelic 'Culyie' which was used informally to refer to a puppy, or a grown dog, in the way we dog lovers are inclined to say 'Hi puppy' to a dog of any age!

One popular thought is that Colly was a Gaelic word which meant useful, and these herding dogs were definitely useful! However, Scots Gaelic for 'useful' is 'feumai'l (which is pronounces a bit like the word 'female'). So, I'm not sure if this is accurate.

In order to herd sheep across rocky and harsh terrain, the dogs needed to be strong, sure-footed and agile.

Because they may have had to move their charges over quite a distance they also needed stamina.

Scotland's weather is not for the faint of heart, and in order to be protected against the cold, wind, rain, snow, and general dampness, working dogs needed a thick weather-proof coat.

These physical characteristics are totally in line with those of any animal who lived in a mountainous environment with a cold, damp climate, develop naturally over time.

Interestingly, they also fit with what we know about early Scottish herding dogs, and are in line with the earliest records of the physical appearance and abilities of Scotland's Bearded Collie.

So, could this possibly mean that these strong, rough-coated, herding dogs, the ancestors of today's Bearded Collie, were the original 'Shepherd's Dogs', the foundation for all the collie dogs who developed in Scotland over the centuries?

Yes, it could... but like so much of the history of Scotland's Bearded Collie, there's no proof one way or the other, and in true Scottish fashion, there are other theories, stories and speculation that offer up alternative scenarios for the origins of the Bearded Collie, and we'll take a look at those next. 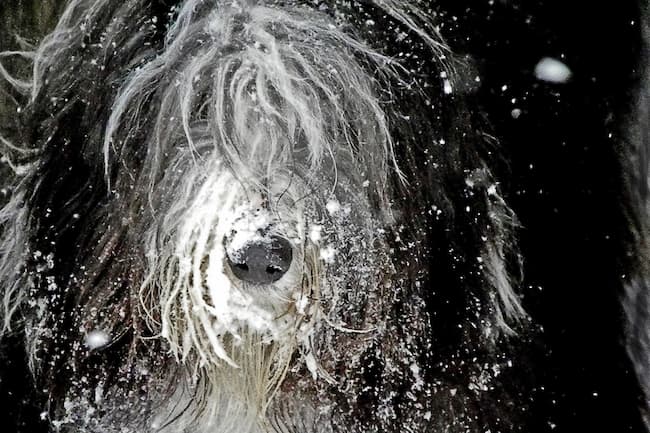 'All that can really be said is that over the years a longhaired, hairy-faced dog developed in Scotland, valued for its hardiness and its ability to work sheep and cattle. Little or no attempt was made to fix type until late in the 19th century, working ability being the only criteria.' 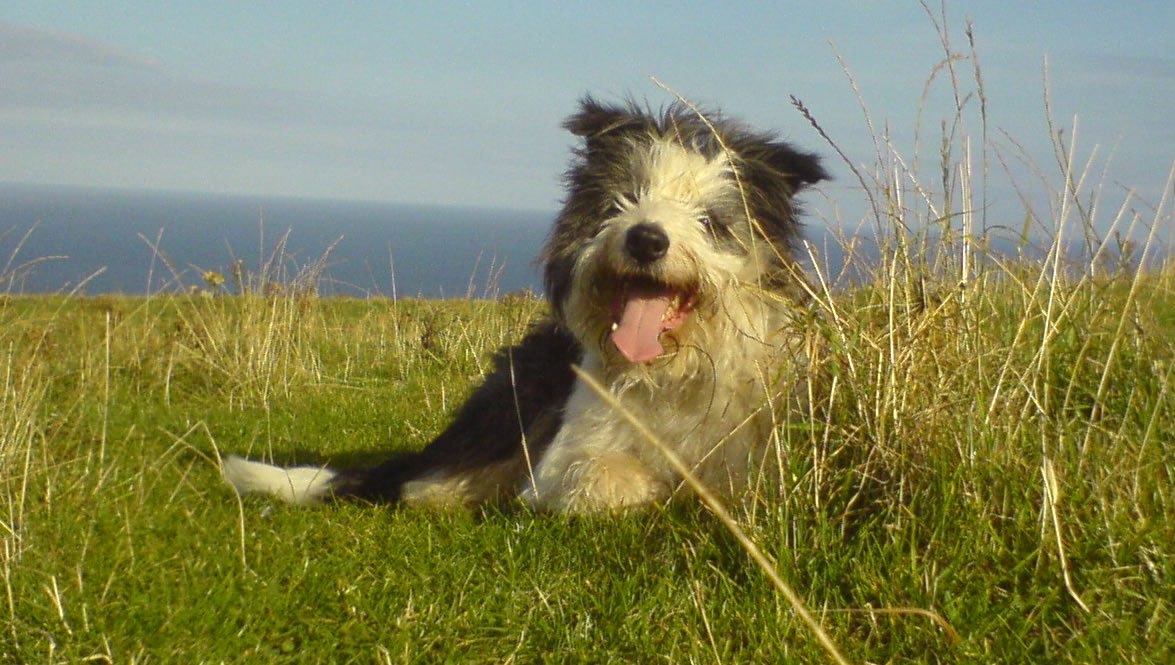 A Purely Indigenous Breed, or Not?

While the Bearded Collie is undoubtedly one of Scotland's native breeds, is it an indigenous breed? Or were there other factors, and breeds that came into play.

It's impossible to know for sure whether the Bearded Collie developed in Scotland in an entirely natural way, or whether mankind had a hand in shaping his looks and abilities.

Invaders sometimes brought their own livestock, and dogs with them. In addition to livestock, trade often included other animals, including dogs.

So, it's very likely that the indigenous Scottish dogs interbred with others from far-flung countries, introducing physical traits that wouldn't have been seen otherwise.

Of course, they also would have bred with other types of local dogs to produce mixed breeds (which were called 'curs') with a variety of different physical features and abilities.

The breeds that historians and authors over the years have thought may possibly have been combined with native Scottish herding dogs to create the Bearded Collie include:

Some speculate that the Olde English Sheepdog was bred with local herding dogs to produce the longer coat of the Beardie, but that seems unlikely as the timeline doesn't really fit. 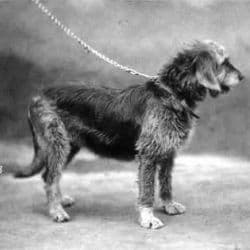 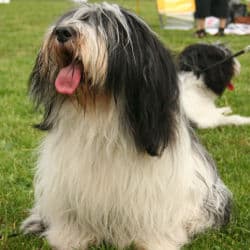 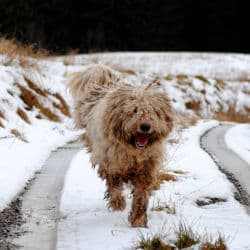 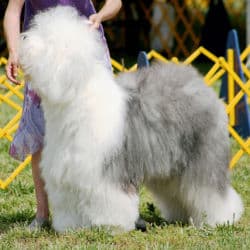 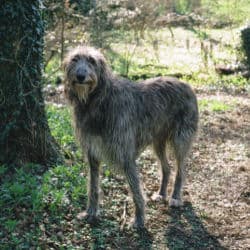 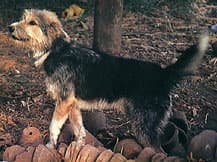 There are definitely similarities between the Scotland's Bearded Collie and England's Old English Sheepdog, as there are between the Beardie and the Polish Lowland Sheepdog, and the Egyptian Sheepdog.

There is documented evidence of a handful of PONs being traded by a Polish merchant to a Scottish farmer in exchange for sheep during the 16th century. So it's most likely those dogs did breed with native Scottish dogs, but which ones we'll never know.

Likewise, we'll never know whether it had any impact on the development of the Bearded Collie as a breed, but a handful of dogs would make very little difference over time, especially given how disorganized their couplings would have been.

The Birth of the Bearded Collie Breed

The earliest written records of Scotland's Bearded Collie as a recognized, and individual, breed appeared in the late 1800's, and things moved quickly from there.

In 1891, in his book 'Dogs of Scotland', D.J. Thomson Gray put into writing a description of the Bearded Collie for the very first time.

If you're interested in how the Beardie looked at this time (in what was likely it's purest and most natural form) CLICK HERE to see the words of Thomson Gray.

A few years later, in 1898, Mrs Hall Walker produced the first formal breed standard for the Bearded Collie, which went without revision until 1964 when the height requirements were reduced. Mrs Hall's standard remains the foundation for all future standards.

Around this time early references began to be made to there being two different types of Bearded Collie, a Highland strain (gray and white coat) and a Border strain (slightly wavy, brown and white coat).

It's quite likely that the breed as a whole would develop a slightly different look over time, depending on whether it existed in the cold, mountainous Highland region or the flatter, wetter, and warmer (relatively!) lowland/border region.

However, during the last years of the 19th century it was suggested that some Bearded Collies may have interbred with other Scottish herding dogs such as the Border Collie to produce dogs who were a blend of both varieties in terms of looks, and abilities.

Again, we'll never know what really happened, but over time both strains were interbred to produce the one Bearded Collie we know today.

One of the earlier pieces of art are an oil painting by John Frederick Herring in 1885, entitled 'A Hound and a Bearded Collie seated on a Hunting Coat' 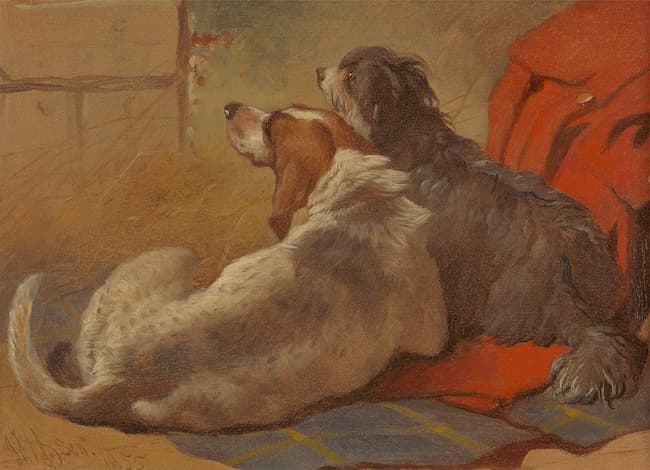 There were multiple others, including those shown below. 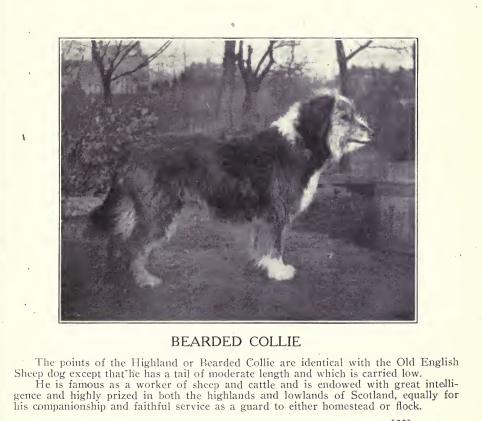 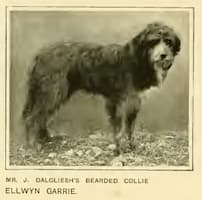 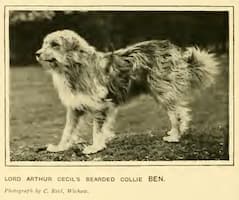 You can see the different 'looks' of the Bearded Collie in the photos above, these may well be the differences between the Highland and the Border strains.

Notable written references and/or early photos are included in:

During this period the Beardie made a transition from purely working dog to show dog, and in 1923 the Bearded Collie Ninewells Nell, owned by Mrs Cameron Miller, was awarded 'Best of Breed'. She went on to become the dam of a well-known show circuit Beardie called Balmacneil Jock (who appears in 'Hutchison's Dog Encylopedia').

Mrs Miller was one of a few successful Bearded Collie breeders (with her Balmacneil kennel name) in the years between WWI and WWII. Unfortunately WWII temporarily halted the breeding/showing of dogs (all breeds) for obvious reasons, and by the end of the war many breeds were in disarray with only a few dogs left (at least of the show lines). Working dogs were still on the job during wartime!

In 1948 Mrs G.O. Willison registered the first Bearded Collie, Jeannie of Bothkennar since 1939, and during the 1950's Mrs Willison's Bothkennar dogs were dominant in the show ring.

The Bearded Collie gained in popularity during the second half of the 20th century and was recognized by the Kennel Club in Britain in 1959. During this decade the breed was imported to the US (being recognized by the AKC in 1976), Australia and around the world.

In 1989, a Bearded Collie named 'Potterdale Classic at Moonhill', won Best in Show at Crufts, giving the breed it's fifteen minutes of fame.

Sadly, Scotland's Bearded Collie is now on the Kennel Club's 'Vulnerable Native Breeds' List as it is in danger of dying out due to low numbers.

Anything below 300 dogs being registered in a year puts a breed in that category and in both 2016 and 2018 there were less than 300 Beardies registered. Although numbers rebounded slightly in 2019 (307 registrations) the breed is still dangerously low in numbers.

Finally, here's one image I wanted to include, it's Bob the Railway Dog, taken somewhere between 1878 and 1895 in Australia.

Although Bearded Collies weren't known to be exported to Australia before 1930, some emigrating Scots likely took their dogs with them.

Bob is listed as a Koolie (Australian herding breed) and Smithfield Collie (one of the old names for the Bearded Collie) cross.

You can clearly see the Beardie in him, and I think it's a good way to round off a page that's full of historical mysteries! 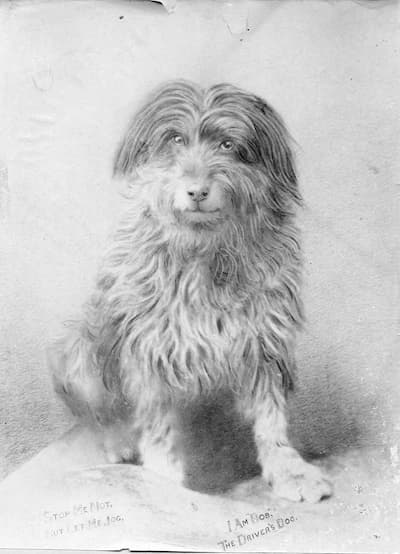 A lot of research went into this page, some of my resources include: